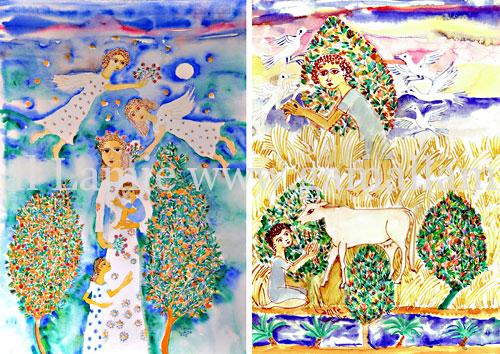 CAIRO — Gamal Lamie’s paintings at a Cairo art gallery depict calm mothers with serene children, shining stars, doves, flowers, trees, fish and blue waters — the many attributes of an Egypt that once existed, and, he believes, can again be achieved.

These two watercolor painting are by Egyptian artist Gamal Lamie. His paintings at a Cairo art gallery depict calm mothers with serene children, shining stars, doves, flowers, trees, fish and blue waters, the many attributes of an Egypt that once existed, and, he believes, can again be achieved. (CNS photo | courtesy Gamal Lamie)

All it takes is hope, said the Egyptian artist, a member of Egypt’s Coptic Christian minority that traces its roots back to St. Mark the Apostle.

“I think during the last five years, you can see what happened in Egypt and the Middle East area. So … as an artist, I send a message to the whole world that we need hope,” Lamie told Catholic News Service almost exactly five years after a January 2011 revolution shook the predominantly Muslim North African nation and toppled longtime dictator Hosni Mubarak.

Waves of civil and political unrest across Egypt have killed and wounded thousands of people since then.

“Hope means peace, it means stability. It’s not weapons, it’s not fighting. We need to live in peace, that is why I call it ‘Hope,’” Lamie said of the title he’d chosen for his exhibit of watercolors in a small ground-floor apartment-turned-art gallery in an upscale district of Cairo.

In the show’s largest painting, boys and girls form a ring with their arms in what Lamie said illustrated youth of the world coming together to create global peace at a time of widespread war in his region.

“It was a terrible time when I started working on this, all the news coming about what is happening in Syria and in Iraq and in Sinai especially,” he explained, referring to ongoing civil strife in the first two nations and a surge in extremist violence in Egypt’s Sinai area.

“I said if I express myself in a painting about the pain, it will be black, it will be a disaster. So I said I should think the opposite way, to the happy side and the peaceful side instead … and invite the children of the world to be together,” Lamie said.

In another painting, two women embrace in fields of flowers against a backdrop of a bright blue, orange and green sky. Each is pregnant with a clearly visible, wide-eyed child in their bellies.

“The women can be (the ancient Egyptian goddess) Isis, or St. Mary or my wife or my daughter. Women … are sometimes in the corner and they don’t have the same opportunities as men, so I am trying to express that in Egypt now they are trying to give them rights, and you can see what happened in the parliament. We have more women and that is a good move,” he said of his country’s latest government, led by military-backed president, Abdel Fattah el-Sisi.

A third painting represents one woman offering a bouquet of flowers to another dressed in Japanese clothing, in what Lamie said he created as both a commemoration for the destruction caused by war and strife, as well as a reminder that such destruction can be overcome.

“Look at Japan, (the United States) hit them, but they survived, and now Japan is flowering and all the destruction (that) happened in Germany and they built it again,” he said, calling on Egyptians to try to “forget” hardships of the past, and to focus on the future.

“We have a lot of opportunities of building again what was broken in five years. We have behind us more than 5,000 years of experiences, and we feel that we can overcome,” Lamie said.

Egypt’s Coptic minority has suffered discrimination for decades, but attacks against Christians and their properties rose sharply following the 2011 revolution and the subsequent election of conservative Muslim Brotherhood member, Mohammed Morsi.

After massive demonstrations against his rule in 2013, Morsi was overthrown by el-Sisi, whom human rights groups accuse of widespread abuses, ranging from mass detention of political opponents to restricting the rights of nongovernmental organizations and journalists.

Christian leaders, including Pope Tawadros II of Alexandria, patriarch of the Coptic Orthodox Church, have for the most part supported el-Sisi who claims he is preventing Egypt from falling into the hands of Muslim radicals.

“Of course, it is no fun to have a military regime, but it is protection for the country,” Lamie said. Although many members of Egypt’s Christian community, including his brother, have opted to leave the country since the revolution, Lamie said he had not considered it.

“It is not easy to immigrate and to take a decision to leave your home and your country and the place you lived forever,” he said, with a hint of sadness, followed by a pause and then tears.

He explained that after several post-revolution robberies in his home where he had lived for three decades in the ancient village of Dahshur, he and his family had to move to the relatively safer area of Cairo. In one nighttime attack, armed assailants left Lamie partially blinded in one eye.

“I lived 30 years of my life in Dahshur and we had a beautiful garden (which) we planted, my wife and I together. So you cannot forget,” Lamie said.

The trees, flowers, shining stars, doves and blue waters of his paintings, were thus also a memory of all Lamie had to leave behind as well as a source of healing, he explained.

“This is my memory from the place. I can make it as a healing for me and for others, and you can feel hope, and dream that one day (the violence) will stop and we can live in prosperity.” 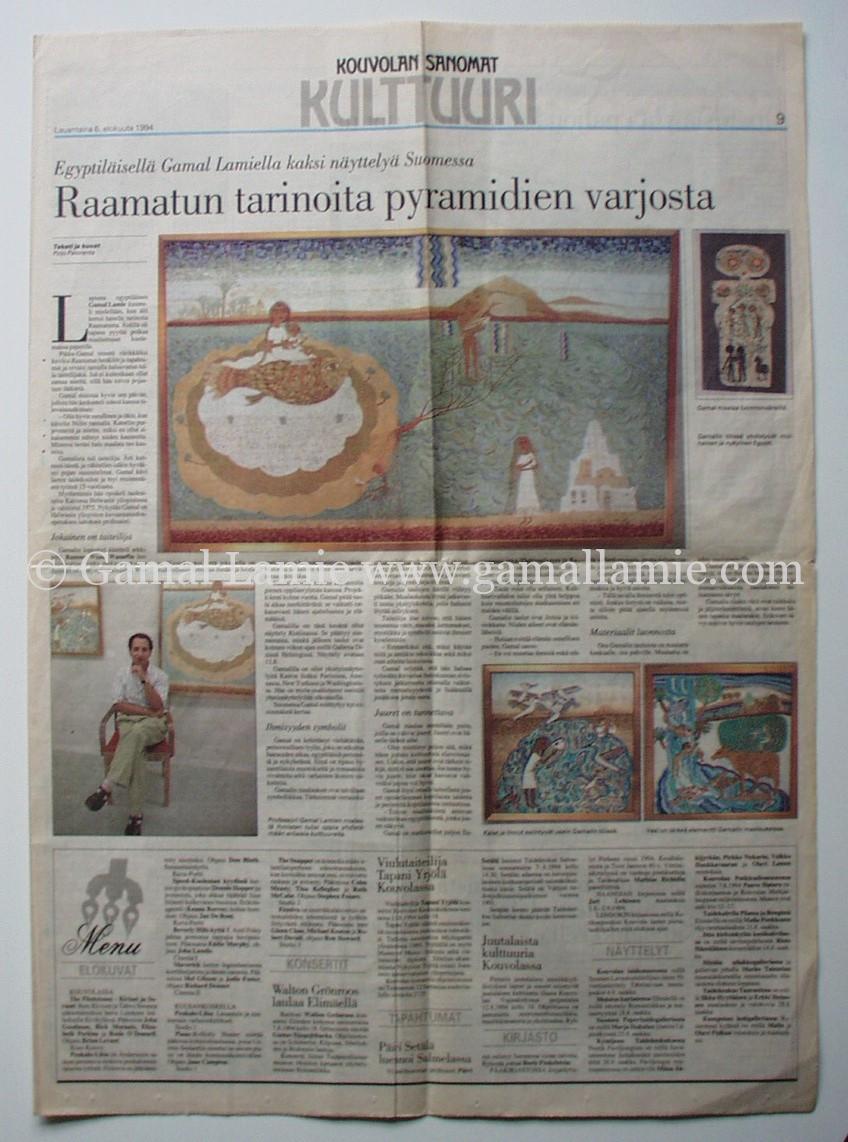